September 3rd 2018 marked the launch of a partnership between the Global Confederation of Higher Education Associations for Agricultural and Life Sciences (GCHERA) and the American University of Beirut (AUB) in a project funded by the W.K. Kellogg Foundation (WKKF). The launch ceremony held on the Beirut campus of AUB highlighted soft skills and community engagement as central elements of the project that will share and extend key elements derived from the EARTH University model to institutions in Mexico and Haiti, and across GCHERA’s global university network.

La June Montgomery Tabron, President & CEO, W.K. Kellogg Foundation (WKKF) spoke via video link. Ms. Tabron welcomed the partnership with AUB and GCHERA and stated, “we know that what you will create from this endeavour will be outstanding leaders across the globe, leaders who will go back to their own communities and improve the lives of the families and children of those places. As a founding funder of EARTH University, we have a long history with EARTH and the mission of preparing visionary leaders for service in their home countries. Our founder, Will Keith Kellogg, believed in the capacity of people to change the world around them. EARTH’s spirit and purpose is a part of Mr. Kellogg’s legacy. This new project to bring EARTH’s service learning model to students in many more countries will only widen the circle of this important work.”

The President of AUB, Dr. Fadlo R Khuri noted, “for hundreds of years, universities have advanced science and knowledge but we have not done enough student-centric learning. Young people have a strong desire to change the world. We are looking at a new model to transform university education by working formally to develop future leaders and change agents using the EARTH University model.” He went on to say, “as the first four institutions demonstrate the success of the model, others will follow, bringing changes to many GCHERA universities.” 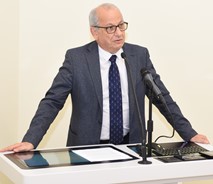 é Zaglul, President Emeritus of EARTH University, spoke about the importance of values and ethics, and the role that academic institutions can play in resolving conflict and helping ensure the sustainability of the planet that we call home. Dr. Zaglul stressed that “academic institutions can change the world, and very quickly because most of the leaders from the private and public sectors, government and politicians are university graduates. It is a dream, and we have to dream if we want to make a change. If we work together, we can change the world.” 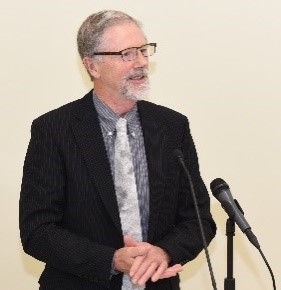 Dr. John Kennelly, President of GCHERA, welcomed the partnership with AUB and lauded AUB on its leadership and enthusiastic commitment to the project. He also thanked the W.K. Kellogg Foundation for supporting a project that will help transform university education in order to form the ethical leaders the world needs. He indicated that the WKKF-funded project is the first step in implementing the GCHERA Action Plan and he looked forward to engaging other partners to expand the project to interested institutions across GCHERA’s global network of 900 universities.

Connections to the GCHERA Action Plan

The launch of this project marks an important milestone in the implementation of the GCHERA Action Plan. GCHERA identified the education remit of agricultural and life science universities as its primary focus in its current Action Plan.  This arose out of a concern that education – the core mandate of universities –  does not get the same attention as research, as demonstrated in global rankings of universities where the quality of undergraduate education often has limited impact on universities’ standings.  This slant towards research is happening at a time when universities, especially in Africa and Asia, are also experiencing explosive growth in enrolment without the additional resources to support that growth. As a result, the quality of education suffers and graduates are not well equipped to meet changing societal needs. 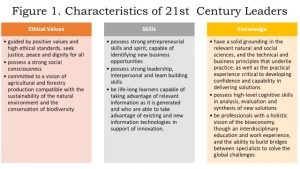 The GCHERA Action Plan was developed during a series of global workshops and conferences where GCHERA members presented examples of innovation in curricula and pedagogy at their universities. The desirable characteristics of 21st Century leaders (Figure 1) were identified as a starting point for action.  In 2016, GCHERA collaborated with the Global Forum on Agricultural Research (GFAR) in hosting a workshop in Cape Town that brought together representatives from interested organizations including FARA, YPARD, GFRAS and AWARD to discuss next steps in the implementation of the Action Plan. This was followed by the 2017 GCHERA World Conference that featured speakers from six continents discussing the role of universities in achieving global food security and food safety.  One of the outcomes from the conference was “a clear consensus on the need to move to a student-centered, experiential learning-based educational model focused on developing leadership, entrepreneurship, values and ethics, so that graduates can make meaningful contributions to solving the twin challenges of nutritional security and environmental sustainability.”

The GCHERA Action Plan is also aligned with the recommendations from the 2016 GCARD3 conference in Johannesburg that identified undergraduate education reform as a priority. The need for graduates who are change agents capable of tackling nutritional security and environmental sustainability has never been greater. Graduates are also facing a shift from public to private sector employment opportunities and there is a greater demand for problem solvers and entrepreneurs to drive economic growth.  Creating a learning environment that fosters the desired characteristics in our graduates and prepares them to serve their communities and countries is a central pillar of the WKKF-funded project.

Across GCHERA’s global network of 900 universities, there are many examples of good practices that create learning environments where students excel. EARTH University in Costa Rica is a university that, for three decades, has produced graduates who have gone on to be agents of positive change in their communities and beyond. Thus, the W.K. Kellogg funded project draws heavily on EARTH’s Key Elements of Success – values-based education, experiential/participatory learning, community engagement, social entrepreneurship, ethical leadership and decision-making – with the goal of encouraging other universities to adopt the principles underpinning these elements, tailored to meet the particular circumstances of each participating institution.

The goal is not to replicate EARTH University, rather to encourage universities to consider adopting some of the practices that have been so successful at EARTH and other universities across GCHERA’s global network.

The process of developing the GCHERA Action Plan helped identify universities at the forefront of innovation in undergraduate education. We will draw on this expertise to help deliver on the project change agenda and extend the benefits of this project to thousands of students across our network.

While the pilot project will target select universities in Mexico and Haiti, as these are priority countries for WKKF, GCHERA will concurrently engage with other universities that are interested in the reform agenda.  We welcome expressions of interest from universities that would like to become involved in the project.   GCHERA will share resources and materials with this network, facilitate discussions between members and other experts, provide space for representatives at relevant workshops, and collaborate with its member associations to secure additional funding to extend this project.  In turn, participating universities will be responsible for sharing their expertise and experiences, funding projects and programs, and most importantly, implementing the changes that will foster the characteristics of 21st century leaders.

A special thanks to the W.K. Kellogg Foundation for its support and encouragement as we developed the project. Incidentally, WKKF provided support for the establishment of GCHERA and they have been long-term supporters of EARTH University.

The leadership role provided by Dr. José Zaglul, founding President of EARTH deserves special mention. Without his passion and commitment, this project would not have been possible.

Project Team and Board